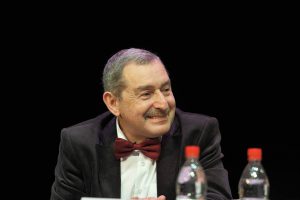 Aleksandr Kolbovskii is a film and television critic, and a journalist. His articles have appeared in numerous journals, including Iskusstvo kino, Teatr, and TV-reviu. He has also published in a variety of newspapers, in a wide range of newspapers, from Literaturnaia gazeta to Argumenty i fakty, Obshchaia gazeta to Kutl’tura. He has written several books and directed documentary films. Since 2004 he has done broadcasts on the history of cinema for the program Good Morning on Channel One. Starting in 2007 he became the host of the Film and Television Guest Room for the Jewish Cultural center. He has been teaching in the Higher School of Television at Moscow State University since 2012.