Dumpling Brothers is an absurdist dark comedy.  As the English international release title suggests, the film is about brothers and dumplings: the brothers Andrei and Vlad produce the comedy, and the dumplings lead to the absurdity.  The characterizations of the brothers in this buddy film are based on opposing binaries: Andrei is tall, attractive, rich, and a successful banker; Vladimir is short, balding, poor, and a cellist in a symphony orchestra.  Vlad embodies traditional Russian culture, both high and low: he can play classical music or sing like a guitar-strumming Russian bard; he values art above money; and he lives in a cramped, but cozy apartment with his wife and two children.  Andrei embodies Western culture: he prioritizes money and work over art; he lives in a spacious and expensive, yet austere apartment; and he has an American boyfriend.  The film neither condemns nor celebrates Andrei’s homosexuality.  More than a political statement, the characterization comes across as a device that further contrasts the two brothers.  The film does not explore gay life in Russia; rather it satirizes Russian homophobic culture by taking it to extremes.

The only thing that would seem to unite the two brothers is the death of their father that occurs at the beginning of the film.  Andrei and Vlad become worried that their mother’s health will decline, and they decide that she needs something to occupy her time.  They pick a fight about who loves her dumplings more.  To keep them from quarrelling, the mother makes them dumplings, the Russian national comfort dish.  What starts off as a well-intentioned remedy to make their mother feel better quickly spirals into something destructive.  The mother starts making dumplings day and night to feed a hunger that her sons do not have.  Andrei and Vlad are flooded with dumplings that invade their apartments and businesses, and negatively affect their relationships.  Vlad’s wife is frustrated that they overrun her house; her first innocent gesture to unload them on the security guard at Vlad’s workplace turns into a budding affair.  Andrei’s boyfriend Alex despises the dumplings, even though he pretends to enjoy what Andrei refers to as the Russian national dish and a family meal.  Alex looks for new relationships, convinced that Andrei is sneaking off to his cottage in the woods to sleep with his aide, Vera. 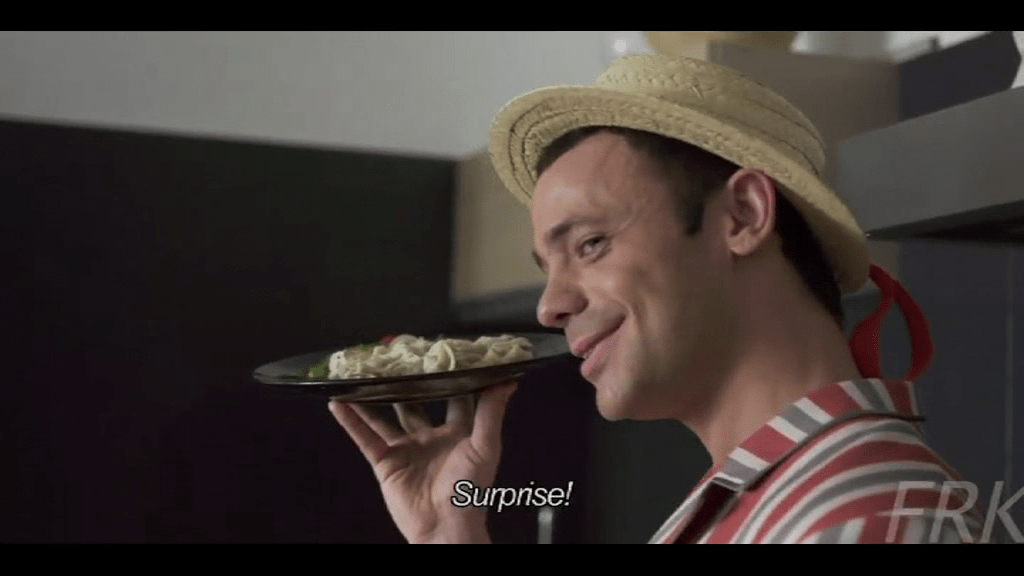 Andrei and Vlad are sneaking off to the cottage in the woods, but not for romantic reasons.  In an effort to give their mother money, the two lie to her that people have started ordering and purchasing her dumplings.  It only results in an overwhelming amount of dumplings and the problem of unloading them all.  They put the dumplings in large black garbage bags and bury them in the woods, which makes it look as though they are disposing of human bodies, not dumplings.  Since the directors of orphanages, hospitals, and homes for the elderly are all skeptical of the dumplings, Andrei and Vlad are forced to waste this sacred dish.

If dumplings are destroying Andrei and Vlad’s interpersonal relations, they signal rebirth and new love for their mother.  She starts dressing better, feeling happier, and she even goes to a hair salon, where she meets a widower, Stanislav Sergeevich.  The two begin dating, and Stanislav Sergeevich seems to be the only person immune to the mother’s dumplings.  He claims to be a vegetarian.  Andrei and Vlad think he is on their side, but the old retired Soviet factory director only exacerbates the situation by buying a dumpling machine to increase production in (fittingly for his character) what no one wants: more dumplings.  Andrei and Vlad have to do more and more to get rid of the dumplings, which seem to be multiplying.  Their relationship comes to a tipping point in the woods when Vlad is bitten by one of the dogs eating the dumplings they buried.  The film moves into darker territory when Vlad shoots what he thinks to be the rabid dog, but is in fact Alex, Andrei’s boyfriend who (it would seem) has taken a taxi out to the cottage to spy on Andrei and see if he really is cheating on him.  Now Vlad and Andrei have to get rid of a real body.  They put the body in the car only to find out later that it has disappeared. 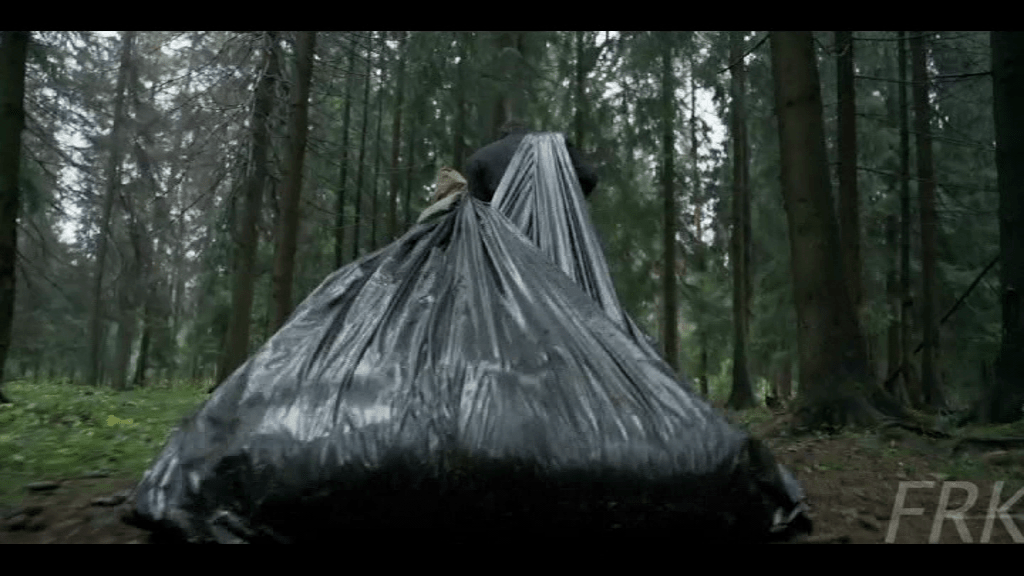 After a fight that almost ends in the brothers killing each other, they find out that Stanislav Sergeevich has been playing them for quite some time.  He has been supplying their mother with the meat for the dumplings—which turns out to be the flesh of homosexuals he has serially murdered.  He even planted Alex with a dog mask so that Vlad would shoot him, and the brothers would finally turn against each other.  The two are able to overcome Stanislav Sergeevich, but they only become more distant after the tragedy they go through.  The film ends with a repetition of the beginning.  Two years have passed.  Vlad and Andrei have been re-united by a death in the family, their mother this time.  Vlad is a broken man, but still surviving.  Andrei seems markedly more in touch with the archetype of the Russian stoic muzhik, in a leather jacket.  The two drink vodka together, which is something Andrei refused to do at their father’s funeral.  After an awkward conversation about the death of their mother, they find themselves hungry.  The film ends with them making dumplings together. 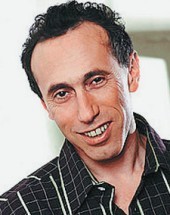 Gennadii Ostrovskii made his directorial debut in 2011.  He has worked as a scriptwriter for several prominent Russian directors such as Aleksandr Rogozhkin, Valerii Todorovskii, and Sergei Dvortsevoi.  In addition to his education in scriptwriting and directing (under Semen Lungin and Larisa Golubkina), Ostrovskii studied saxophone at the Rostov State Conservatory at the end of the Soviet period.  Dumpling Brothers is his second feature film.