Nikolai Lebedev’s Legend No. 17 premiered in Moscow in spring 2013. A biopic of the posthumous hockey star, Valerii Kharlamov, Legend was awarded the state-prize of the Russian Federation in 2014 among other distinguished film awards. The real-life Kharlamov was the prodigy of Anatolii Tarasov (Kharlamov’s long-time coach, credited as the father of Soviet ice hockey) and one of the top players for CSKA Moscow (ЦСКА, Tsentral’nyi Sportivnyi Klub Armii) from 1967-1981, until he died tragically at age 33 in a car accident. Nicknamed “The Red Machine,” he was one of the top performing hockey players in the world at the time of his death, the prime of Soviet hockey. To shed perspective on his talent, after he led the Soviet team to victory at the Olympics in 1972 the National Hockey League had two teams propose $1 million offers for Kharlamov. At the time, the NHL’s top-performing players were only earning $12,000-15,000 per season. Kharlamov never defected to the West but, instead, achieved numerous milestones as a Soviet hockey star: eight gold medals in eleven world championships, eleven out of fourteen national championships, his efforts (and sustained injuries) in the 1972 Summit Series between Canada and the USSR, and two gold medals at the Olympic Games. 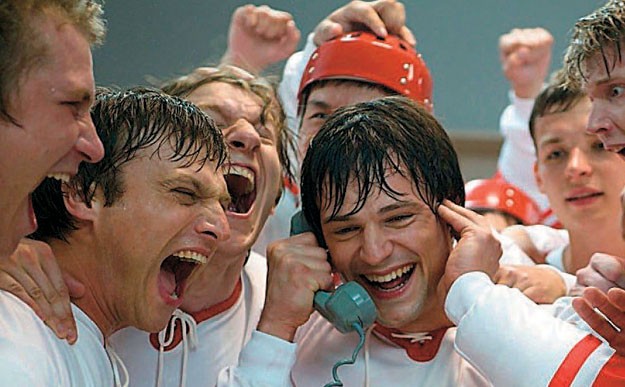 While a blockbuster success, Legend has been disparaged for its overtly nationalist overtones and its coziness to Vladimir Putin’s administration. When Lebedev appeared on the late night show Vechernii Gerasimets, for example, during his promotion of the film he was quick to mention that Putin had seen Legend and described the Russian president as a “pleasant conversationalist” (priiatnyi sobesednik). Putin, the film’s most faithful advertiser, appeared on stage during a televised presentation of Legend on the eve of the Youth World Hockey championships in 2013. Prior to the screening he greeted the young Russian team with a brief introduction about the real Kharlamov, his character, and the challenges that the athlete faced during his life: “And not only did he deal with it, but he became an outstanding player not only on our team, but in global hockey.” The president, moreover, gave a public speech on behalf of Kharlamov’s birthday in 2013, which was then posted on the Kremlin’s official website: “One of the brightest and most talented players in hockey history, Valery Kharlamov was an idol to millions of his fans. The speed and unique style of this outstanding forward, his great force of will and team spirit were crucial to many of CSKA’s convincing victories, the triumphs of our national team at the Olympic Games and world championships, the Summit Series between the USSR and Canada, and other major tournaments. Today Valery Kharlamov’s name, his successes and achievements, are the pride of our sporting world and entire country. I am sure that CSKA hockey club, Russia’s ice knights, will continue to honour Valery Kharlamov’s rich heritage and develop the tradition he founded. And younger players will look up to this legendary player and wonderful person.” 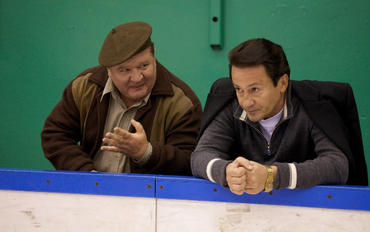 Putin’s sustained public praise of Kharlamov as a role model and the impact of his reputation on the global sport community draws attention to the president’s initiatives in consolidating Kremlin interests with mass culture. Legend, as expected, has been successful in corralling collective celebration and nostalgia for a cultural moment when Soviet Olympic athletes were highly revered on the world stage. The film has sustained immense popularity despite its disloyalties to the details of Soviet hockey history and the particularities of Kharlamov’s biography.

As scholars like Dennis Bingham point out, the biopic is an appealing genre because of its ability to see a historical public figure transformed into a character. Legend, indeed, presents us with a fictional Kharlamov that bears questionable resemblance to the real athlete of the Soviet era. The film’s treatment of Kharlamov’s biographical details, however, become trivial if we accept that Lebedev’s work speaks less about Kharlamov, Soviet hockey, or Russian nationalism and more about contemporary Russian cinema’s wielding of celebrities and its obsession with fame, power, and a system of valorization.

The film employs a star-studded cast, inviting an exploration of the multiple layers of the celebrity apparatus at work. Legend, first, invites us to think about the real, posthumous Kharlamov as a hockey star, irrespective of biographical fidelity. The film, second, asks us to flirt with the celebrity persona of Kharlamov, the fictional construction of the athlete as it is narrated for cinema. Legend, third, features an arsenal of acclaimed actors like Oleg Men’shikov (playing the celebrity coach, Tarasov), Vladimir Men’shov, and Danila Kozlovskii. Kozlovskii, a young high-earning film star himself, practiced skating for months on the ice with staff trainers at his disposal in order to play the “dream role” of the celebrity athlete. Kozlovskii, it should be noted, has been cautious in interviews and subtly critical of the merging of the celebrity with the political in Russia.

Beyond the scope of the film’s cast, it is worth mentioning that during one of the promotional shootings prior to the its premiere, Lebedev enjoyed a publicity stunt during which he had the opportunity to dress up as Kharlamov in front of the cameras. Standing before the Legend film poster, he was photographed and interviewed while modeling a jersey labeled “17,” the number, of course, that Kharlamov championed. Last but not least, in his efforts to capitalize on his own celebrity status through Kharlamov’s star text, President Putin appeared at a gala hockey game in Sochi on his birthday in October 2015—well-attended by state officials, legendary sports stars, and former NHL hockey players—to perform the role of star athlete on the ice. The treasury of actors and players involved in the production of Legend suggests the power of the collective celebrity system in building a fictional persona. Legend’s part in the construction of celebrity mythology also demonstrates its potential for crafting and calcifying national, political, and cultural platforms.

Nikolai Lebedev was born in Kishinev. He studied journalism and graduated from Moscow State University in 1991. He then studied under Vladimir Utilov at the State Institute for Cinematography (VGIK) in Moscow and graduated in 1993. From 1995-96 he worked as a director and scriptwriter for Russia’s Sesame Street (Ulitsa Sezam). In addition to his work in cinema and television, he has also co-authored several detective novels. Lebedev’s films have received numerous prestigious cinema prizes including the Golden Eagle and awards at Nika.