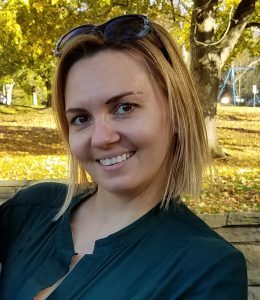 Olga Klimova holds a Ph.D. degree from Pitt’s Slavic Department and M.S.Ed in Instructional Technology from Duquesne University.  She is currently teaching at Washington and Jefferson College in Washington PA and is a Research Associate and an Online Language Tutor at REES, University of Pittsburgh.  She has also taught courses in language, literature, culture, and film at Brock University, Mercyhurst University, and Chatham University.  Her articles, film and book reviews appeared in The Soviet and Post–Soviet Review, Kinokultura, SEEJ, and other academic publications.  Her current research interests include late-Soviet and post-Soviet culture, literature, and cinema, youth culture, Belarusian and Polish cultures, Central Asian cinema, and representations of Chernobyl.