Orlean is the second collaboration of Andrei Proshkin and scriptwriter Iurii Arabov after The Horde (2012). Both of the collaborators took a riskier path than they have ever before. The scriptwriter Arabov, who has worked with Aleksandr Sokurov on serious, art-house films, has come together with the young director to produce a film of “bad taste,” adopting the style of black humor and grotesque. As the film’s director promised before its theatrical release, the film clearly has allusions to Mikhail Bulgakov’s Master and Margarita: the Ekzekutor, which can be understood as a personification of the protagonists’ shared conscience, coming to the town to debunk immorality; the giant cat; and the sign of W at apartment number 52 that harks back to the initial of Woland.

The story takes place in the provincial, remote town of Orlean. In the original script, the town is located in the Altai region near the Iarovoe Salt Lake, ironically juxtaposing the French city’s name with its location in the Russian Far East. However, film shooting took place in Crimea for practical reasons. The film opens and ends with a gigantic landfill that leads to the barren town of dilapidated buildings. To this backward, boring town, where the only entertainment seems to be an itinerant circus troupe, comes the Ekzekutor to debunk the moral and spiritual degradation of the town, especially of three sinners: the vulgar hairdresser Lidka, who has killed enough potential children to fill a “whole kindergarten class” through a series of abortions; the egoist doctor, who neglects his paralyzed father and is involved in endless love affairs with prostitutes, including Lidka; and the brutal police chief Nevolin, who lets off the murderer-magician in exchange for killing the Ekzekutor and annihilating his body.

The Ekzekutor’s condemnation is directed more towards Lidka than the two others. At the beginning of the film, viewers see two corpses on screen: an anonymous woman’s body with flies buzzing around in the landfill while the police chief Nevolin investigates the crime scene and the fetus that Rudik removes from Lidka’s body in his abortion clinic. The Ekzekutor and his doubles, following the trio of sinners wherever they go, bombard viewers with philosophical and religious harangues. Even without taking seriously the tiring, sophisticated citations, it is not difficult to grasp the religious and moral values (moral propaganda) that this film conveys.

After the trio’s successful effort to remove the Ekzekutor from their lives, they realize they desperately need him either to maintain their boring lives in the hopeless town or to reestablish their humanity. All three sinners end up punishing themselves: Nevolin detains himself in the prison, resigning from his post; Rudik retreats into complete darkness to run away from the Ekzekutor, who comes back to life like Christ after sacrificing himself for their sins. Unlike her male counterparts, Lidka seems to be the only one who achieves potential redemption and escapes from a horrible fate. When her child calls the resurrected Ekzekutor “father,” the scene of embracing him clearly manifests a revival of her motherhood and the renewal of a holy family. But the story unfolds further; Lidka’s complete spiritual revival will finally be achieved only when she gives birth to a new baby by an innocent teenager as recompense for her murdered fetuses.

The style of kitsch and grotesque combined with black humor, as Proshkin pointed out in his interview, is an attempt to alleviate the film from its straightforward morality. At the same time, the soundtrack, composed by the British band The Tiger Lilies, produces a jarring effect in conjunction with the philosophy that is explicitly manifest in the film. In fact, this incongruence resulted in was a real conflict between the film’s crew and the musicians, who later found out the film was to be based on conservative religious philosophy and tried to cancel the contract. They ended their negotiations by requiring the insertion of the caption in the end credits that says “the Tiger Lilies’ moral and ethical values do not reflect those held by the makers of the film.”

Such highly-stylized theatricality with bright color and punky music reduces a central circus scene, which could be characterized as either a horrific gore fest or a sacred substitutionary atonement to a freak show bleeding cranberry juice. In the epilogue, after the apocalyptic storm, the police assistant finds the monkey from the circus on the chair that Nevolin had prepared as the Messiah’s seat at the entrance of the town. Does this sarcastic ending imply no salvation in the Sodom-like town? The storm has severed the road to the town, leaving the sinners isolated, suffering from their guilty and hopeless lives.

Alternatively, the monkey, caught in the assistant’s binoculars, gazes directly at the screen and brings the whole show to a close by lowering the curtain. Considering that the film opens with transparent plastic curtains on a screen that surrounds the crime scene, does such theatricality avoid the whole acerbic vision of contemporary Russia by reducing it to an absurd farce or a horrific circus show? Are the viewers at whom the monkey gazes in the position of the trio who have conspired in the monstrous circus scene, or are they spectators in the show, who can take “that monstrosity” simply as an illusion on the stage? 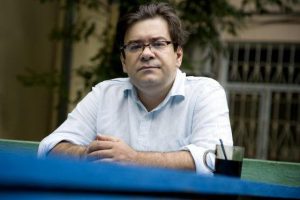 Andrei Proshkin is a Russian film director and son of the director Aleksandr Proshkin. He graduated from the Department of Journalism at Moscow State University before studying in the workshop of Marlen Khutsiev at the VKSiR (the Advanced Courses for Scriptwriters and Directors) in 1999. He worked as an assistant director under Karen Shakhnazarov and Aleksandr Proshkin, and made several TV series for channels Russia-1 and REN TV. His debut film Spartacus and Kalashnikov received the Award for Best Debut Director at the Golden Eagle Film Awards in Moscow. He is currently the head of the Film Union, which was established in 2010.