Shot in 1956, the year of Khrushchev’s fateful report on the Stalinist cult of personality, Grigorii Chukhrai’s drama, The Forty-First, is an interesting example of early Thaw cinema. Centered on a tragic story of passionate love that flared between a communist sniper, Mariutka, and her ideological enemy—White Army officer Vadim Govorukha-Otrok—the film contains a number of important tropes of Thaw cinematography. Along with its inclination to elicit universal human feelings hidden beneath social masks and the conflicting political agendas of its protagonists, the film tends to romanticize the communist revolution, turning it into a private and tragic affair of a devoted personality. 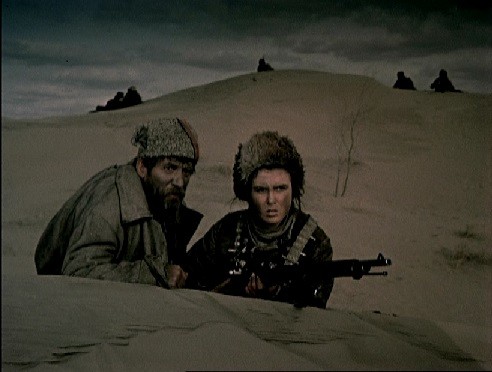 Chukhrai’s The Forty-First comes as a re-make of its namesake predecessor, the black-and- white silent film by Iakov Protazanov made in 1927, based on a novella written by the Soviet writer Boris Lavrenev. Despite using the same literary source, the original film and its remake offer two drastically different viewing experiences. The time lapse of almost 30 years, which divided the epochs of Protazanov and Chukhrai, was crucial for the development of cinematography with its rapid transition to sound and color, from which Chukhrai’s adaptation greatly benefitted. Sergei Urusevskii’s camera in Chikhrai’s film turns the human tragedy of the revolution into a battle of elements akin to a visual symphony, where natural textures and colors play a pivotal role. Urusevskii’s depiction of the desert, the sea, the sky, are often counterpoints to the human presence, becoming powerful metaphors of transience and the fragility of human life, serving as a strong poetic and philosophical statement in itself.

Despite their inevitable differences, the films by Protazanov and Chukhrai focus on similar aspects of Lavrenev’s narrative, which helps in considering them as connected phenomena. Both start off telling the story of a small Red Army detachment in Central Asia that manages to avoid death at the hands of the White Army, breaking through its encirclement. Here we first meet Mariutka, a female sniper who counts her victims and has already reached 40. Despite her military service in the all-male collective, both films picture Mariutka as a virtuous woman, rejecting the advances of her colleagues and fully devoted to the cause of the revolution. After their initial success, the detachment’s commander, commissar Evsiukov, makes a decision to move through the desert to the Aral Sea in order to reach Red Army headquarters in Kazalinsk. The detachment suffers from a lack of water and provisions until it encounters a Kazakh caravan moving through the desert, escorting a high ranking officer, Vadim Govorukha-Otrok, who is fulfilling an important diplomatic mission for the Whites.

Here the routes of the films by Protazanov and Chukhrai begin to diverge, reflecting the historic changes in the construction of cinematic images of the Civil War. While the ensuing robbery of the caravan by the Reds is shown neutrally by Protazanov, in Chukhrai’s film the Reds are largely presented as “gentlemen of the road.” They whistle when they attack the caravan, invoking an association with the Russian folklore bandit Solovei Razboinik, known for whistling while performing his misdeeds (his name, Solovei, means “nightingale,” used mockingly). At the same time, paradoxically, the Reds in the Thaw adaptation of the Lavrenev’s novella are presented as slightly more humane than their counterparts from the Protazanov’s film: unlike the latter, they leave several camels to the Kazakhs, understanding that the complete expropriation of the caravan “in favor of the revolution” might prove fatal for its owners. Here, again, we see the humanist turn in the narrative, with which the earlier adaptation of the novella was completely unconcerned.

The notion of the Reds and the Russian revolution, which the locals are forced to support, is combined with an imperial sentiment, picturing the communist detachment as a multinational formation. In Chukhrai’s film, the battalion contains one Kazakh and at least one Ukrainian soldier, subordinated to the Russian commissar. What is remarkable here, is that both soldiers are eventually eliminated as members of the detachment: while the Kazakh dies falling victim to the revenge of the caravan owners, who come to reclaim their camels, the Ukrainian is ostracized for sleeping on duty resulting in his colleague’s death. The tendency to portray a revolutionary collective as an ethnically diverse group is less evident in Protazanov’s film than in Chukhrai’s. As a trope, the imperial impulse attained its particular importance in Stalinism, consequently affecting Thaw cinema.

As mentioned earlier, the depiction of nature bears an important expressive and philosophical function in Chukhrai’s film. When the detachment loses the stolen camels, and with them the hope of surviving before they reach the Aral, the group is shown being gradually “swallowed” by the desert: before the Reds reach the sea where they will be eventually taken care of by the Kazakh villagers, the detachment will have already lost several of its members. Nature is depicted as a destructive and a largely indifferent force, anticipating the film’s tragic finale. 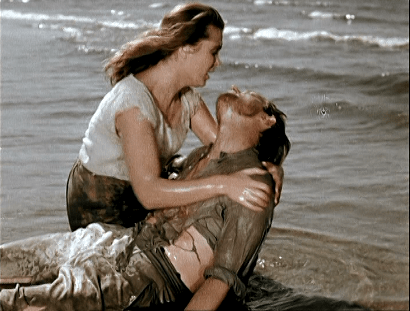 Nature plays a key role in the depiction of the relationship unfolding between Mariutka and Govorukha-Otrok after the latter is captured during the caravan attack. The Reds’ plans for the White officer include delivering him to their Kazalinsk headquarters for interrogation and subsequent execution. Death as a subversive theme is constantly present in Chukhrai’s film, with nature portrayed as a source of both life and its destruction. Assigned to guard Govorukha-Otrok, Mariutka is shown gradually developing passionate feelings for her class enemy. The romance culminates when the couple is stranded on a deserted island in the Aral Sea after their boat is destroyed in a storm, frustrating the commissar’s order to Mariutka to deliver Govorukha-Otrok to Kazalinsk. The depiction of the peaceful life of the lovers on the island is accompanied by images of burning fire and tidal waves, creating a powerful metaphor of the couple merging with the forces of nature. In one scene on the beach, Govorukha-Otrok describes his happy time with Mariutka as “the days when you fully merge with nature, feel a part of it and rejoice together with it.” However, this idyll is brutally disrupted by the intrusion of class antagonism, which they could escape only briefly. After the appearance of a boat carrying White soldiers, Mariutka fulfills the promise she had given to commissar Evsiukov before she was dispatched on the mission to deliver Govorukha-Otrok to Kazalinsk: to shoot the officer if there is a chance he may be saved by the White Army. Thus, Govorukha-Otrok becomes Mariutka’s forty first victim: to her own horror, she is too good a sniper to miss her target.

Grigorii Chukhrai, was born in Ukraine in 1921. After serving in the Soviet Army during World War II, fighting at the Battle of Stalingrad, Chukhrai became a student of Mikhail Romm and Sergei Iutkevich at the State Institute of Cinematography (VGIK) from which he graduated in 1953. Between 1966 and 1976, he headed the experimental studio at Mosfilm, which released a number of internationally acclaimed films, including Andrei Tarkovskii’s Solaris (1972). Chukhrai’s own debut film, The Forty First (1956), received the special prize at the 10th Cannes Film Festival, while his second big success, Ballad of a Soldier (1959) brought him the top prize at the San Francisco Film Festival in 1960. Grigorii Chukhrai died in 2001. He is outlived by his son, Russian film director Pavel Chukhrai.